Michael wants to be a professional skater. His father wants him to go to college. He sets about to follow his dream but it comes with consequences. Will he succeed? Will Michael's dreams crash and he will wake up on the job with his father mixing cement? Will he ever escape the confines of North Hollywood?
A very good doggy in a town of very awful people. Found on the side of the road, Red Dog is brought to the Australian mining community of Dampier. From there he would become a legend and great unifier of the people. Years later, the men celebrate their doggy companion and his unswerving loyalty and endless sacrifices for their vanities... all while ignoring that one of them most definitely murdered him.
Bounty Hunter Jack Walsh is hired to bring in an embezzling mob accountant known as "The Duke" before his bond defaults in five days. What should be an easy Midnight Run becomes a series of misadventures in one of the world's favorite buddy comedies. Will Jack make it in time? Will the mob catch up with them and make The Duke disappear? Is this secretly connected to The Score? Probably, possibly, I hope anyway.
All that and Dave fears getting old, Tyler doesn't do much of anything, and Kevin once again rubs our noses in the mess we left on the carpet. Join us, won't you?
Episode 209- Dog the Bounty Blunter 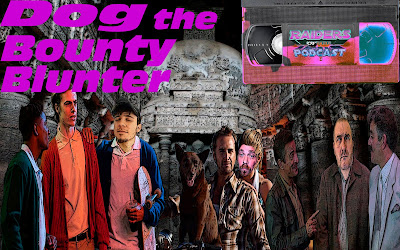 Posted by Raiders of the Podcast at 7:30 AM No comments:

This week- two films about the joys of travel.

When hotel manager Lisa boards a late night flight from Dallas to Miami, she never expected to spend the flight seated to a terrorist who forces her to make a choice. Her father's life for a Homeland Security Deputy Secretary's. There will be no rest of the wicked or the virtuous on this Red Eye.
Danny is a wannabe, Dex is a legend. When their paths cross, Danny dives head on into orchestrating a road trip to rebuild the once great firm and give Dex his long denies revenge. Taking shots at the British hooligan genre supported whose who of the genre's biggest names along the way. Will Danny and Dex succeed in restoring the greatness of The Hooligan Factory?
All that and Dave caves to peer pressure, Tyler gets his whoop whoop on, and Kevin once again proves that he's the classiest top boy to ever get his Hungarian auteur on. Join us, won't you? 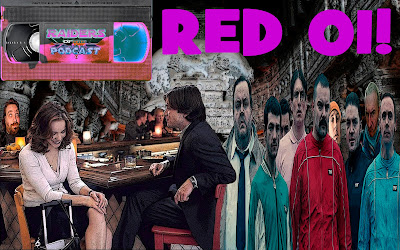 Posted by Raiders of the Podcast at 6:30 AM No comments:

When Perdita meets up with Romeo, it's not long until they find themselves why over their heads with the DEA hot on their trail, a pair of tourists to be sacrificed, a trailer full of frozen fetuses (or foetuses if you are British), and their employer looking to clean up loose ends. Based on Barry Gifford's third book in the Sailor and Lula series. Who leads Perdita Durango in her dance with the devil?
An America student at Oxford wants a notorious professor to advise on his thesis. In order to make that happen, he takes up residence at the home of an old friend of the professor's, begins dating a former fling of the professor's, stalks his lectures, and before either knows it they are dragged into a a murder mystery that might be taunting the professor. In between killings there's a lot of talk about concepts that no one involved with the movie understands while standing around in fairly dull English sitting rooms. Who will be the next victim of The Oxford Murders?
Javier is a sad clown. He works with happy clown Sergio, who is also a violent sociopath one drunk night away from murdering his girlfriend, Natalia. Hard violence, black humor, sharp social satire and a sad trumpet ballad play out The Last Circus.
The antichrist is coming and Angel, a Basque priest, is going to do as much evil as he can in his attempt to thwart it. Joined by a heavy metal loving record store clerk and an occult TV host, Angel will try to stop The Day of the Beast in anyway he can.
All that and Tyler suffers, Kevin demands hunky boys, and Dave flees a psycho cop. Join us, won't you?
Episode 207- Mark of Iglesia 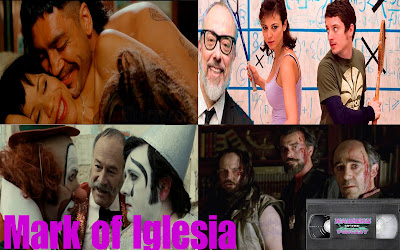 Posted by Raiders of the Podcast at 7:17 AM No comments:

This week RotP heads to the beach for some sun and fun and love and surf and conquest and white savior shenanigans.

When Allie Fox gets tired of whining at his sons about how much America has fallen from the good old days, he packs up his family and moves them to Belize. To make ice. Which apparently he thinks the people there will confuse for precious stones and worship him over. No one said Allie's plan was a good one. Not counting Allie. Will the Fox family sink or swim or die of leishmaniasis on The Mosquito Coast?
Anne Marie has been invited to compete in a prestigious competition at the famed Banzai Pipeline. If she makes a good show of it, she can land sponsors and make a better life for herself, her younger sister, and her friends who all live together actively helping to raise the sister. Unfortunately, Anne Marie is more interested in romance with a sexy NFL player in town for the Pro Bowl. This drives a wedge between her and the others. Will Anne Marie rise to the challenge, will she make a good football wives reality star?  Does that matter when you have the wave's Blue Crush calling?
All that and Kevin likes to watch, Dave is lost in an inner journey of no discovery, and Tyler regresses to tweendom. Join us, won't you? 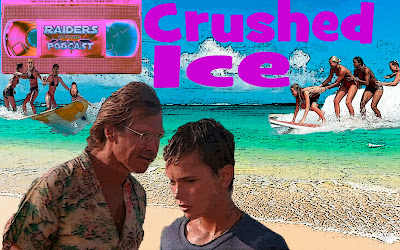 Posted by Raiders of the Podcast at 6:33 AM No comments:

This week Dave takes it upon himself to amend two grievous oversights. After learning about gaps in cohost viewings, and making some small sacrifices to Meiko Kaji for guidance, a vision was given unto Dave and he cheated the random pick pull to bring everyone to deliverance.

Born to avenge her family, trained through her entire childhood, finally unleashed and hell bent on gory revenge. Yuki seeks out those who killed her father and brother and spent days raping and torturing her mother. Raising standard samurai exploitation to the highest of visual poetry, not even death can keep Lady Snowblood from her satisfaction.
Harold is bored and the only thing that keeps him entertained is a light spot of dramatic suicide. His mother, uncle, and therapist don't understand him and he can't live the life they proscribe for him. Then one day, at another crashed funeral, Maude drifts into his life. A dark comedy about existential anxiety and what might be found when you embrace it. One of cinema's greatest love stories, Harold & Maude.
All that and Kevin gets dirty in Cape Town, Tyler spirals in nostalgia, and Dave runs out of places to hide his sacrifices. 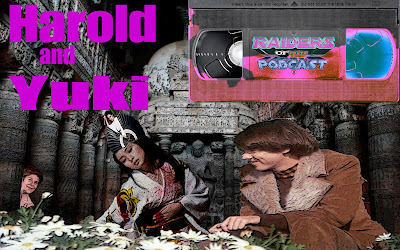 Posted by Raiders of the Podcast at 6:44 AM No comments:

A movie about a family lost in outer space and one about someone lost in inner space.

When serial killer Carl Stargher is found comatose on his kitchen floor, a desperate detective turns to an experimental therapy to help find her location. The therapy requires Catherine Deane to dive deep into Stargher's subconscious. A visual marvel from a master of imagery. Can anyone escape from The Cell.
The year is 2058 and Earth is dying. In order to prepare a new world for colonization the family Robinson launch in the Jupiter II to build the other end of a jumpgate. Tragically, the missions is sabotaged by the villainous Doctor Smith just before launch. Now the Robinsons, their pilot, and Smith are all light-years and decades off target and in a part of the galaxy never before seen by human eyes. Why they sent a family comprised of three doctors and two preteens instead of, I don't know, an experienced deep space construction crew is a mystery for the ages. Not that it matters. All that matters is the Robinsons are Lost in Space!!!     All that and Tyler makes a sacrifice to the bewb tube, Kevin watches a very long documentary, and Dave feels feelings he's just not ready to feel. Join us, won't you? 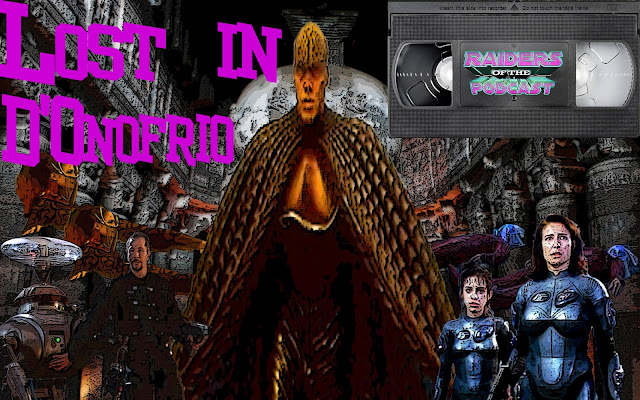 Posted by Raiders of the Podcast at 6:50 AM No comments:

A tournament held once a generation, conceived by the Elder Gods, as a way to slow Outworld's aggressive expansion against the other realms. When a realm loses 10 consecutive tournaments, the portals open and Outworld absorbs the realm into itself. Earthrealm has lost the last nine tournaments.

This week all four features about the tournament brought to arcades by Midway and eventually kicked off a Congressional panic. Mortal Kombat (1995), Mortal Kombat: Annihilation, Mortal Kombat Legends: Scorpion's Revenge, and Mortal Kombat (2021). We are in for a bloody time. Join us, won't you? 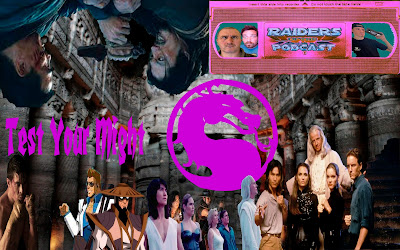 Posted by Raiders of the Podcast at 7:22 AM No comments: