This week we get our Yakuza flicks on as Japanuary rolls full tilt into it's third week.
First up, Takashi Miike's Ichi the Killer. A psychotic man is used as a pawn in a Yakuza gang war while he is hunted by a sadomasochistic enforcer. Violence and  insanity explode on the screen in a grizzly and giggling way.
Then we take a look at the first in a massive nine entry series and a stone cold classic in its own right- Brutal Tales of Chivalry (aka Chivalrous Tales of the Showa Era). Ken Takakura is Seiji Terajima, a man just returned home from the war and immediately thrust into the leadership of his gang. Seiji is determined to not go into a war with their local rivals but he might not have much choice. How far can you push an honorable man?

All that and Dave forgets where he is, Tyler finds himself in a rap battle to the death, and Kevin finally opens a box set. Join us, won't you?
Episode 137- Courtly Expectations of Homicide 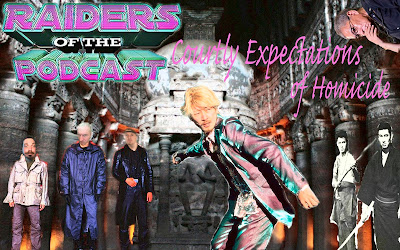 Posted by Raiders of the Podcast at 7:10 AM