Is This Your Foot or My Knee? A Japanese Body Horror Special


We bring another Japanuary to a close with four doses of Japanese Body Horror.
Yoji is a lonely factory worker with is eye on co-worker Sachiko. When he intervenes in a potential attack, little does he suspect that soon both their lives will take an unexpected turn. Necromorphs everywhere in a bloody confrontation, does anyone survive a trip through Meatball Machine?
Five teenagers are on a drive when their car breaks down. For no real reason they decide to hole up in a way too suspicious looking bunker. Booze flows, nudity abounds, and before too long someone will become host to Sexual Parasite: Killer Pussy!
Yoshiaki is suddenly having seizures, which mutates his extremities for a moment. Because that's not worrying on levels that would require extreme hospitalization, he and his wife instead turn to their psychiatrist friend and shock therapy enthusiast. Before you know it, bodies are dropping and a marriage is tested, everything could swing out like a Henge (aka Metamorphosis).
Finally, the third theatrical entry and fourth overall in the long running Juni Ito created Tomie series. When a young artist suddenly murders his girlfriend, he will learn that getting rid of her isn't that easy because she has a habit of Tomie: Re-Birth.
All that and Kevin has some explaining to do, Tyler questions how he was beaten in the perversion department, and Dave suffers loudly. Join us, won't you?

Episode 138- Is This Your Foot or My Knee? A Japanese Body Horror Special 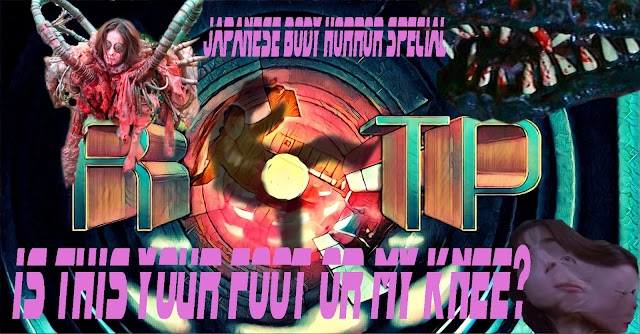 Posted by Raiders of the Podcast at 6:18 AM