Vengeance of the Fireflies


Japanuary continues with a pair of stone cold classics!
Shohei Imamura's 1979 portrait of a killer that won Best Picture at the 1979 Japanese Academy Awards inspired by the true crimes of serial killer and scam artist Akira Nishiguchi. Take a look at the life of Iwao Enokizu, a man who is so ashamed of his father as a child in the run up to World War 2 that he grows up to be a petty confidence man and eventual killer. Does Enokizu's unusual story and overview of lives outside of civilized Japanese society keep Vengeance is Mine a compelling watch 41 years later?     Then the first Studio Ghibli film on RotP, based on Akiyuki Nosaka's semi-autobiographical story. It is the waning months of the Second World War, Seita and Setsuko find themselves suddenly orphaned, homeless, and desperately struggling to survive. Possibly one of the only true anti-war films ever made, regardless of authorial intent, and one that is guaranteed to make you ugly cry. Beautiful acts of love, the bitterest loss, and pain of pretty much everything is found at the Grave of the Fireflies.     All that and Kevin climbs a mountain, Tyler goes deep into STV comedy sequels, and Dave might have survived a plague. Join us, won't you?

Episode 136- Vengeance of the Fireflies 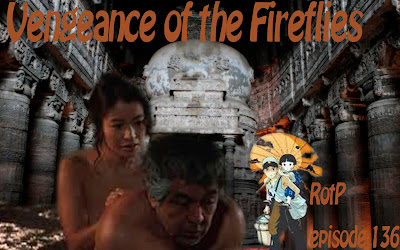 Posted by Raiders of the Podcast at 6:44 AM